This post is a translation from an original post, in Portuguese, aimed for my fellows on the Brazilian Startup community. Keep that in mind while reading.

I've spent a long time away from here. To be more precise, for the last 3 months. But I have a noble reason for that since I was taking part in the 500 Startups acceleration program as a team member of Qual Canal. Here I'll try to pay my debt using words to describe a little how was such experience. I'll try to focus on which caught my eyes and other taboos from the Brazilian Startup community. 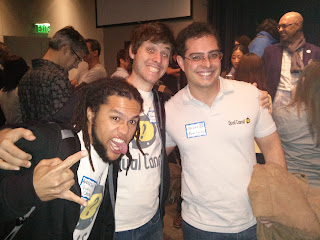 Fer, I and Terra during one of the Demo Days

One of the many advantages of being on the Valley is the proximity that you have with big companies. Reaching directly to big guys like Google, Facebook and Twitter (among others) is a unique opportunity to leverage your business. But, unlike many have thought, it's not as easy to reach these guys as ringing their doorbells. Just like any other community, the secret lies on a very good recommendation to get to who you want. The value of such a network is very clear for those in it. Nobody will forward you if no result will be achieved from that. Keeping fruitful meetings is an aim in the mind of all three parts of this task.

Even after you can get to a meeting, some other differences can be highlighted. I'm not talking about the informal way that the meetings take place. I as a bermudista loved it. But I'm referring to the sincerity and practical way that Americans, especially people from the Valley, runs their conversations. This is very different from the Brazilian way of "smoothing" things. The conversation is very straight forward without wandering around on other things. If during the meeting something points out that the purpose is not going to be satisfied, it's just finished. It may seem rude at first, but is just the practical American way of doing business.

Another thing that caught my eye was the way investment happens. This is very much related to the fact that Americans are a very entrepreneur people, and this helps a lot on this subject. It's very common for the first source of money being the family of friends. Along with that, we have a wide network of investment funds and individual investors that are interested in new products. But, nothing is as easy as many stories tell. To get access to a single penny of these guys is a very tough job. Besides doing your homework (showing good numbers for market, team, and traction) you must have a very good synergy with your investors. The focus is on the so-called Smart Money. The one that comes from investors that will aggregate to the market that you are tackling. 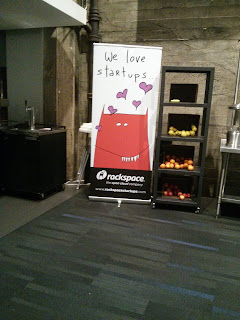 Investment is one of the ways that 500 really put yourself above others. I myself already participated in other acceleration programs, but what I had there was unique, even for American standards. For a start, its not only acceleration that is provided but also an investment on each of the companies on the batch. This gives another vibration to the relationship, since the interest that your idea prospers is ever greater. During all the time we've been there we had a very close eye by the staff, making sure that we've met the right mentors and the right people to leverage our product.

500 also puts itself apart from others on the american market, and other funds, on how wide it spreads its investments. Most of the Americans believe that conquering their own territory must come before going after the global market. It's very understandable, but the fact that 500 goes after many different established markets around the world, not only allows a diversification of their investments but other benefits. One of them is the richness of experience among the batch mates. When you have the opportunity to meet new market and people that are on the top of what's happening in theirs countries, makes you feel like one of them also. This, summed up with the strong collaboration feeling that was kept during the whole program only increased the value added to the companies and the connections among them.

At last, as a coder, I expected that the Silicon Valley was all about technology, and the companies I would meet would reflect that. But, most of the companies on my batch was not focused on the technology they'd created, but the business they explored. Of course, we had some companies with amazing technologies, like WayGo, Kickfolio and the guys from GazeMetrixs. But it's even more incredible to find companies that built great business innovating from email to tea.

It's very clear that summing up all that I learned on this experience in a single post is impossible. Mas here is what really caught my attention. If anybody wants to know anything else, just ask. Can be a comment or just a quick tweet.